The institutions that are part of the network, including the Anti-Fraud Office of Catalonia, have adopted the Rome Declaration, which includes 10 recommendations to European states when transposing the Directive on the protection of whistleblowers. 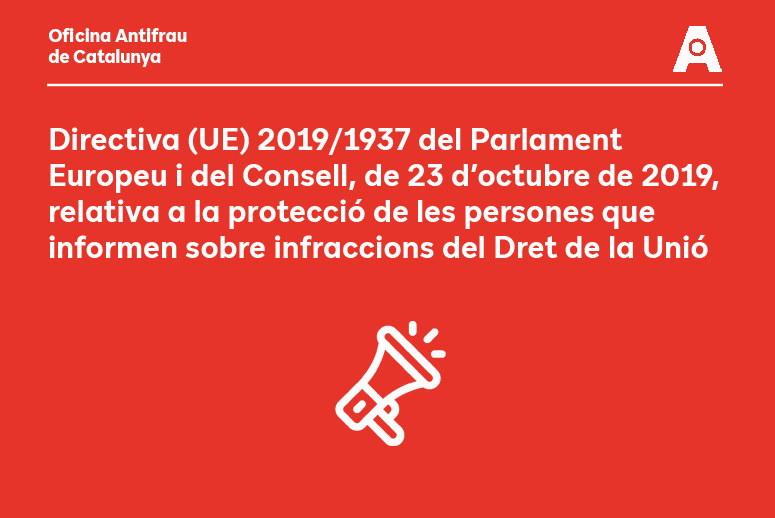 2nd July 2020. The Anti-Fraud Office of Catalonia participated on June 26 in the meeting of the Network of European Integrity and Whistleblowing Authorities (NEIWA), a network of collaboration and exchange of experiences in the field of integrity and whistleblowing that is the European benchmark in relation to the implementation of EU Directive 2019/1937 of the European Parliament and of the Council of 23 October 2019 on the protection of persons who report breaches Union law.

At the meeting, which was organized virtually because the current COVID-19 health crisis, by the National Anti-Corruption Authority of Italy (ANAC) and moderated by the director of the Institution for the Protection of Alerters in the Netherlands (Huis voor Klokkenluiders) involved twenty-one authorities from the member states of the European Union (central and regional), including the Anti-Fraud Office of Catalonia.

During the meeting, the conclusions of the five working groups set up to facilitate the exchange of information between authorities of various kinds were shared. And the Rome Declaration of the network was adopted, which makes clear a series of recommendations addressed to those responsible for the executive or the legislature in the future transposition of the Directive.

The working groups addressed various aspects of the competent authorities (their institutional design, their nature, their competencies in relation to the duties of informing and supporting alert people, the formal requirements for filing complaints, etc.) and it was determined that the designation of one or more independent authorities was necessary to receive and deal with reports within the scope of the EU Alert Protection Directive. It was also made clear that the authorities of this nature need the necessary capabilities and resources to ensure the effective monitoring of the alerts received and that their procedures are subject to periodic review.

The second working group dealt with the sanctions provided for in the various existing legislation in the EU in relation to infringements of the rights of whistleblowers or the reprisals they are subject to.

The third working group focused on support measures recognized by the EU Directive such as the financial or psychological assistance of persons who report and the existence of certifications relating to the recognition of the status of whistleblower. In this regard, it was concluded that there was a need for improvement in the dissemination of information and that designated authorities should ensure effective support for whistleblowers and the duty to verify the existence of internal complaint channels.

The fourth working group focused on the transfer of reports to other competent authorities on the basis of the matter and the duty of confidentiality in relation to the whistleblower and shared the experience and difference of protocols in this scope between the various authorities.

The last working group addressed the exemption of liability of reporting persons recognized in the Directive and the reversal of the burden of proof (which falls on the employer) as the measures taken have not state as retaliation as a result of the whistleblower's complaint.