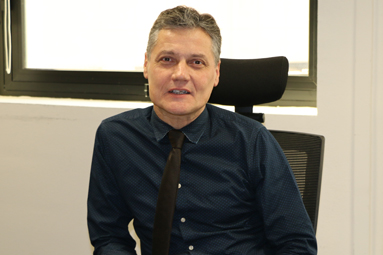 Manel Díaz Espiñeira graduated in Law from the University of Barcelona in 1986 and holds a master’s degree in Employment Law and Social Security, awarded by the University of Barcelona, and a diploma in Senior Management, awarded by the School of Public Administration/ESADE. He is a member of the Senior Administration Corps of the Government of Catalonia.

Between 1987, the year he joined the Administration of the Government of Catalonia, and 2001, he pursued his professional career in areas related to human resources and legal advice.

In 2001, he joined the Technical Secretariat of the Consultative Administrative Procurement Board, where he was in charge of Studies and Documentation, and was head of the Company Classification and Records Division until 2009.

He served as deputy director-general of Supplies and Services in the Directorate-General for Heritage of the Government of Catalonia, vice-president of the Central Supplies Commission and as a member of the Consultative Administrative Procurement Board between 2009 and 2017.

He lectures in public procurement at the Catalan School of Public Administration (EAPC) and has participated as a speaker in a number of seminars on public purchasing.