Skip to main content
The Anti-Fraud Office of Catalonia makes available to all citizens the exhibition Corruption! Ethical revolt with its virtual version

The exposition is an informative tool addressed to everyone, but especially to students in the 4th year of ESO, Baccalaureate and formative cycles of medium and higher grade, since it aims to encourage reflection on corruption and its importance in the construction of advanced democracies

In this sense, the virtual exhibition is accompanied by a pedagogical guide addressed to families and adapted to the current confinement situation, the pedagogical guide for teachers and complementary activities to be done at home with the accompaniment of an adult

The didactic activities linked to this tool have been validated by the Department of Education of the Catalan Government for their fit in the curricular design of the 4th year of ESO, Baccalaureate and training cycles of medium and higher grade 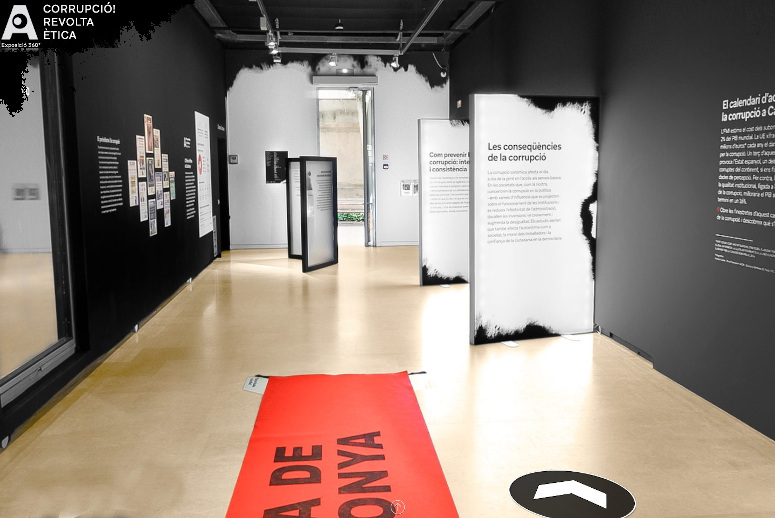 15th april 2020. "Corruption! Ethical Revolt" now reaches all citizens with its virtual version. The exhibition, which has been seen presential at the Palau Robert in Barcelona, during the last semester of 2019, and in the Santa Caterina Space in Girona, can be visited virtually starting today. Anti-Fraud has decided to make it available to everyone after the exhibition had to close its doors in Girona on March 13th due to the health emergency caused by Covid-19. In this way, Anti-Fraud joins the various initiatives that have emerged in the virtual field of putting their resources online to lighten the confinement. Specifically, #Corrupció!Revoltaètica will be associated with #museusosencasa #quédateyaprende #yomequedoencasa #yoactuo.

The exhibition, which has been curated by journalist and UAB professor David Vidal, is an informative exhibition that aims to encourage reflection on this phenomenon and its importance in building advanced democracies, but also wants to provoke personal reflection on the areas in which the personal attitude of the visitor could modify and improve corrupt systems on a small scale. Corruption is a corrosive phenomenon that can lead to very deep social, economic and political crises, generating discouragement and powerlessness in the population and weakening democracy and, therefore, human rights. The exhibition account details that corrupt and fraudulent behaviors arise in societies with a certain moral ambiguity, in which individualism and relativism predominates and the crisis of values is revealed.

The exhibition, which has been seen from February 5th to March 13th of this year in the Santa Caterina Space of the Generalitat building in Girona and the Palau Robert for a few months in the last semester of 2019 where more than 16 thousand people have passed, has been conceptualized and adapted to the virtual world by photojournalist Martí Fradera.

The dimension of the phenomenon of corruption can be seen in the shown data. The European Union account in up to 120,000 million euros the damage caused by corruption each year. A third of this amount, 40,000 million euros a year, is caused by the Spanish State. According to the Anti-Fraud Barometer, 72% of Catalans consider that there is high or very high corruption, and 82% consider that this is a very or quite serious problem. The IMF estimates the cost of corruption at 2% of world GDP.

Two spaces offer visitors a reflection on corruption in a context of a specific or systemic abandonment of personal and/or collective ethics. Three dilemmas are posed with which all citizens can find ourselves and they are asked to participate by giving their answer through a survey. The fight against corruption does not only affect the spheres of politics and the economy, it also affects all citizens who every day make decisions that add to and subtract from the ethical culture of society.

In the space What is corruption, the risks of corruption in public spaces are mentioned, as well as the transparency and detection mechanisms of some northern European countries with a very long history in this area compared to countries such as Spain, with mechanisms of control after the restoration of democracy. Corruption in the public sphere in Catalonia is also mentioned, with concrete and well-known cases for citizens in the form of an Advent calendar.

The issue of whistleblowers and facilitators, key players in the fight against corruption and fraud, also occupy a prominent area. The need for the person who report not to suffer retaliation or professional pressure is discussed. The red flag is a sign of civility and responsibility, not disloyalty or treason. Names such as Hervé Falciani, an engineer who has denounced tax evaders, or other names such as Montse Gasull, Azahara Peralta, Luís Gonzalo Segura, Roberto Macías or Carmen Garcia appear in this section. A prominent place is also occupied by the press for its function of making corruption in societies visible, with covers and headlines of resonant cases of national and international corruption.

Visitors will have to lift carpets -virtually- if they want to know the truth, and will have to react to everyday situations that will test their integrity by responding through surveys to various dilemmas. Also, you will be able to see a selection of the best gags on corruption from the Catalan Television program Polònia, which are part of the Corleone cinema.

The pedagogical guide to learning from home with the visit of Corruption! Ethical Revolt

This tool is direct especially to students in the 4th year of ESO, Baccalaureate and intermediate and higher level training cycles, as it aims to encourage reflection on corruption and its importance in building advanced democracies.

These tools, which were initially thought to be done in the classroom, only require an adult who can follow the pedagogical guide for families to adapt learning to the current new context of confinement. Anti-Fraud has decided to adapt the pedagogical guide for teachers to the new context and make a reduced version of it to be able to carry out the activities with the family.

The didactic activities linked to this tool have been validated by the Department of Education of the Catalan Government for their fit in the curricular design of the 4th year of ESO, Baccalaureate and training cycles of medium and higher grade.

The objective is to provoke a reflection on the areas in which personal attitude could modify and improve corrupt systems on a small scale and deepen these reflections with the youngest through the pedagogical guide and the three complementary activities, which address the following aspects:

The Anti-Fraud Office of Catalonia

The Anti-Fraud Office of Catalonia is an institution specifically aimed at preserving the transparency and integrity of administrations and staff serving the public sector in Catalonia. Antifraud's main objective is to prevent and investigate possible cases of fraudulent use or destination of public funds or any illicit use derived from behaviors that lead to conflicts of interest or the particular use of information derived from the proper functions of the personnel at the service of the public sector.

Control of its activity corresponds to the Parliament of Catalonia, to which it is accountable. It is the pioneering institution in Spain to comply with the mandates of the United Nations Convention against corruption.